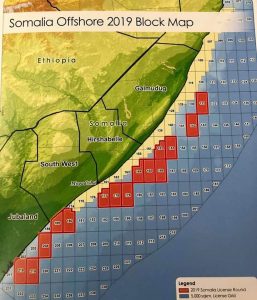 Oil investigation began in 1948 for Somalia, when Sinclair Oil, Conoco, and Agip revealed eight sedimentary basins, but at present, the country doesn’t produce hydrocarbons. Before 1991, many IOCs had acreage in Somalia and more than 60 wells were drilled.

On the other hand, mining can be critical to achieving the development aspirations of Somalia. Often, however, the national development benefits of mining operations have been limited, and in some cases, the results have even been undesirable.

Traditionally, a focus just on mining company rights and the provision of government tax benefits, while giving limited attention to environmental, social, and local economic issues, has limited the sector’s contribution to sustainable development. Working to overcome these issues, governments, companies, and communities increasingly recognize the need for a wider thoughtful of mining’s potential contribution to local and national development. Transforming this awareness into action requires building the capacity, knowledge, and tools required for appropriate reform of government and company policies and processes.

SONRREC has been involved in the development of a Model Mining Development Agreement (MMDA) with the Ministry of Petroleum and Mineral Resources. SONRREC was invited to join the core administrative group on this mining stakeholders engagement forum when it began in 2017. Since then, we have engaged with the national legal and business community to develop an approach based on a simple question: What would a mining contract in Somalia look like if one started from the perspective of sustainable development?

This site uses Akismet to reduce spam. Learn how your comment data is processed.