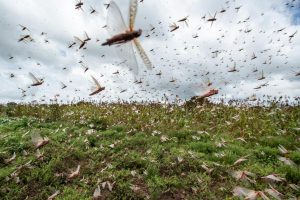 Desert locust or Schistocerca gregaria, is one of the most devastating migratory pests in the world and it is highly mobile and feeds on large quantities of any kind of green vegetation, including crops, pasture, and fodder. A typical swarm can be made up of 150 million locusts per square kilometer and is carried on the wind, up to 150 km in one day. Even a very small, one-square-kilometer locust swarm can eat the same amount of food in one day as about 35 000 people.

It is an international transboundary pest which threatens agricultural production and livelihoods in many countries in Africa, the Middle East, and south and southwestern Asia. Its migratory nature and capacity for rapid population growth present major challenges for control, particularly in remote semiarid areas, which characterize much of the distribution area.

Desert locust, is a plant pest that has been threatening agricultural production in African, Middle Eastern, and Southwestern Asian countries since ancient times. The desert locust is known for its ability to change its behavior from solitary to gregarious in response to locust population density. During recession periods, small populations of solitary locust dwell in remote, non- cultivated areas of the Sahel Desert, laying their eggs in the desert soil. Following a period of above-average rainfall, the soil becomes moist enough for mass hatching and breeding to occur.

The desert locust lives in arid and semi- arid desert habitats, living solitarily when the climatic conditions are not suitable for breeding. During plagues, the locust population increases in size and invades vast areas and more than 60 countries in Africa and Asia are affected at different degrees of infestation.

A disaster outbreak upsurge was recorded in 1993 and 1996, which devoured the harvest of Ethiopia, Sudan, Eritrea, Somalia, and Djibouti (Cressman, 1998). The largest invasion during the last 15 years occurred in 2004, in north and West Africa and it affected a number of countries in the fertile regions of the continent. in 2019, the worst desert locust outbreak occurred in Somalia and in 2020, the desert locust are expected to have a significant impact to stable food crops in Somalia as already observed in the central and Northern regions of Somalia particularly Galmudug State of Somalia.

This paper will evaluate the social and economic impacts to stable food crops of Somalia by identifying the crop and vegetation losses, the livelihood and food security and environmental impacts caused by the invasion of locust desert during the GU’ season of 2020 which is the main harvest season in Somalia.

This site uses Akismet to reduce spam. Learn how your comment data is processed.