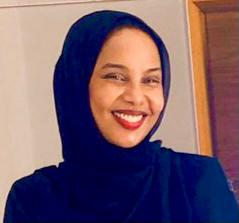 Ms. Muntaziyah M. Jimale is the Director of Presidential Special Envoy for the Horn of Africa, Red Sea Gulf Aden, and Head of the Secretariat for National Maritime Coordination Committee (NMCC) and Maritime Security at the Office of the President of the Federal Republic of Somalia. She is also the lead person for the blue economy and Maritime issue of the Federal Government of Somalia. Between Dec. 2017 – June 2021, She was the Director of Policy and Program Coordinator for Maritime Security at the Federal Ministry of Internal Security of the Federal Government. During her tenure, she was the focal point for FGS gender strategy within the ministry. She has over ten (10) years of experience in public Sectors, including developing national strategy plans under the (SSR), rebuilding a state’s security sector for Maritime.

She has developed several policies and development projects at the national, regional, and international levels. She has planned and coordinated closely with several successful projects that were part of the Conflict Transformation, Peacebuilding including a Security network within Maritime Security Institutions with an abroad spectrum of responsibilities to promote sustainable development democracy, and peace.